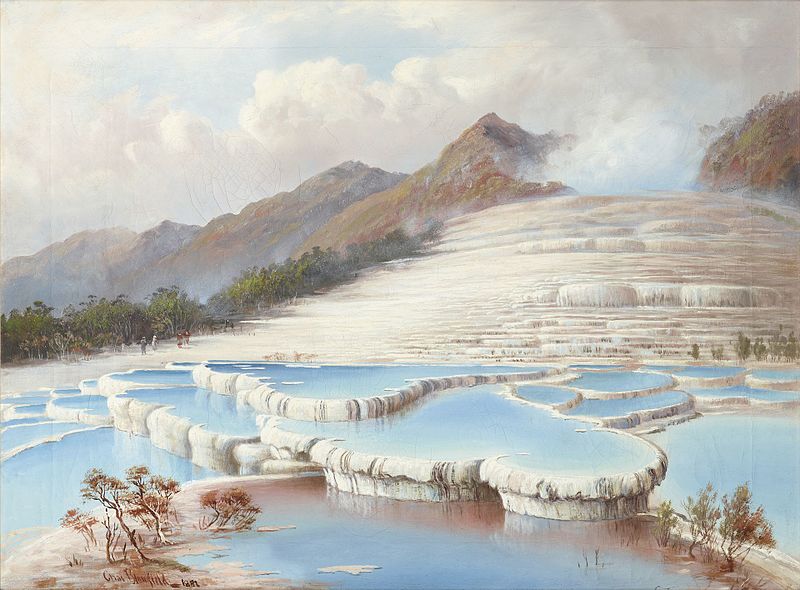 So, I assume you know about the seven wonders of the world, right? Well, what if I told you there were 8? That’s right, there are 8 wonders of the world! Or rather, there might be. In 1186 there was an eruption in New Zealand, the eruption of Mount Tarawera. When Tarawera erupted it supposedly covered an 8th wonder of the world. This 8th wonder was “The Largest Silica ‘Sinter’ Deposit”. For those of you who don’t know what ‘sintering’ is, allow Wikipedia to explain,

In geology a natural sintering occurs when a mineral spring brings about a deposition of chemical sediment or crust, for example as of porous silica.

Sintering looks something like this, for those of you who don’t know what it looks like either, Silica Sinter looks pretty cool doesn’t it? Well, either way, that’s not what the article is on. Let’s get back to the 8th wonder of the world! Supposedly there was a “White Terrace” on the north east side of Lake Rotomahana and a “Pink Terrace” which sat on another shore nearby. These two “terraces” attracted people from all around the world in the 19th century. Let’s hope we can find them again to visit them.

In 2016, a man named, Bunn, who was an independent researcher. Got his big break when Sascha Nolden shared with him an old field journal he’d discovered. This journal came from a 19th century geologist, Ferdinand von Hochstetter, who in 1859 was assigned to make a geological survey of the islands. Now, you might be thinking, “That’s awesome now they a map right to the 8th wonder! I better start packing to go visit it!” Well unfortunately you’d be wrong, they have a map to the 8th wonder, in 1859! So, they were close, but they weren’t quite there!

They now have a map that’s close to where the it might be, but they had to do a TON of work to find the general location of the 8th wonder. Bunn has said it took them around 2,500 hours of research but they think they finally have a general Idea where the wonder is! Of course, to find an actual location we’d have to dig for it. That will take a ton of time, but it’ll be worth it!

Sounds like we might have another world wonder on our hands soon! Better be prepared to fly down to New Zealand soon! Make sure to check back here for more articles like this one!