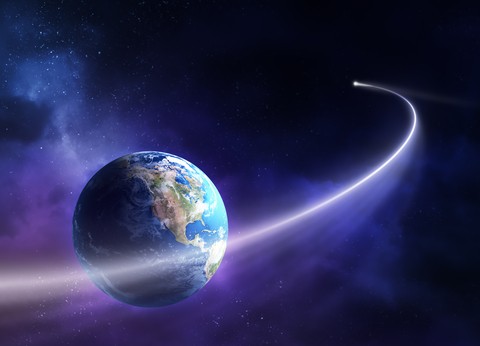 they rarely discuss this…

What is crazier the fact that his happened or that they figured it out?  It is mind boggling what astrophysicists can figure out with math.  Apparently we had a cosmic close call not that long ago.  I guess by cosmic standards 70,000 years is a very short period of time 😉  This is a transcription and intro from the video walking through what happened:

70,000 thousand years ago, an alien passed though our solar system. But not a little green man in a flying saucer, a big ball of burning gas. Astronomers have discovered that a real shooting star, came five times closer than our current nearest neighbor Proxima Centauri.No other star is known to have approached this close to us. The object, a red dwarf nicknamed Scholz’s star, cruised through the outer region of the solar system known as the Oort Cloud. The essentially failed star, wasn’t alone either, it was accompanied on its travels by an object known as a brown dwarf making it a binary star system. Astronomers discovered that the dim stars passed a very close 0.8 light years from the Sun, in comparison, our closest neighboring star Proxima Centauri is 4.2 light years away.

Is this too much or what?  Very few people know about it.