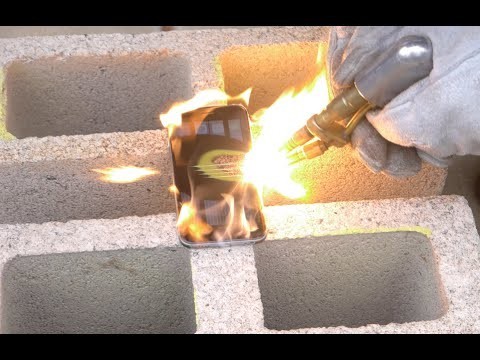 NOTE: DO NOT TRY THIS WITHOUT THE SUPERVISION OF A PROFESSIONAL

The ever experimental Tech Rax decides to do another adventurous test.  he is most famous for doing crazy experiments with smart phones.  Some people ask how he can afford to keep messing up new phones and he has some comments in the video threads to explain.  Some of his other experiments involve pouring weird stuff on the phones.  Here is how he describes this one:

In this experiment we take a new iPhone 6 and give it the Acetylene torch treatment! This torch produces the third hottest natural chemical flame possible. Enjoy!

A lot of the comments on the thread are very spirited.  Here is some background on the scientific method in regards to experiments from wikipedia:

The scientific method is an ongoing process, which usually begins with observations about the natural world. Human beings are naturally inquisitive, so they often come up with questions about things they see or hear and often develop ideas (hypotheses) about why things are the way they are. The best hypotheses lead to predictions that can be tested in various ways, including making further observations about nature. In general, the strongest tests of hypotheses come from carefully controlled and replicated experiments that gather empirical data. Depending on how well the tests match the predictions, the original hypothesis may require refinement, alteration, expansion or even rejection. If a particular hypothesis becomes very well supported a general theory may be developed.[1]

How do you feel about this video and other similar iPhone tests?  Feel free to comment!