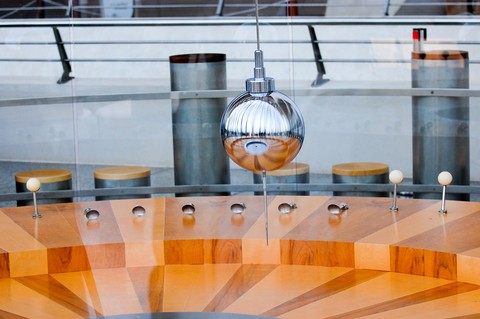 It took them long enough 😉

This scientific question, although seemingly simple, has baffled scientists for 350 years until now.  There is a phenomenon that happens with two pendulum clocks which you would not intuitively think was complicated to figure out:

Almost 350 years ago, Dutch inventor and scientist Christiaan Huygens observed that two pendulum clocks hanging from a wall would synchronise their swing over time.

A study in the journal Scientific Reports has proposed a solution: the pendulums transfer energy to one another through sound pulses.

Apparently, if correct this work could apply to electronic oscillators which are used in the synchronizing of microchips, and studying the properties of many other devices beyond only clocks.  As expected, they proved their theory in this way:

“We could verify that the energy transfer is through a sound pulse,” said co-author Luis Melo, from Lisbon University’s physics department.

Here is more information on how they work from wikipedia:

A pendulum clock is a clock that uses a pendulum, a swinging weight, as its timekeeping element. The advantage of a pendulum for timekeeping is that it is a harmonic oscillator; it swings back and forth in a precise time interval dependent on its length, and resists swinging at other rates. From its invention in 1656 by Christiaan Huygens until the 1930s, the pendulum clock was the world’s most precise timekeeper, accounting for its widespread use.[1][2] Throughout the 18th and 19th centuries pendulum clocks in homes, factories, offices and railroad stations served as primary time standards for scheduling daily life, work shifts, and public transportation, and their greater accuracy allowed the faster pace of life which was necessary for the Industrial Revolution.

We hope you like this cool video of a homemade clock and now we know the answer to this 350 year old question!

thanks to theguardian.com for the great info