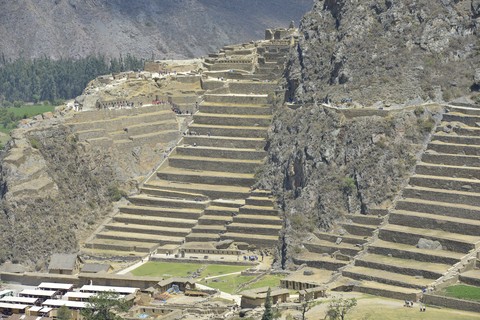 When they flew over it with a quadcopter they got never before seen footage of this Incan mystery.  The types of structures shown here seem almost impossible to have been built with the tools that would be available at that time period.  This has led many archaeologists as well as enthusiasts to rethink previous theories:

Ollantaytambo is one of the largest ancient Inca sites in Peru, but there is far more to it than the work of the Inca.
In this uniques video, filmed using a quadcopter with full permission from the officials, you will see the enigmatic megalithic works, created thousands of years before the Incas

Also a note many archaeologists said the tiers of this structure were meant for farming.  Is that accurate or was there another purpose for this structure?  Feel free to comment as they still don’t really know.