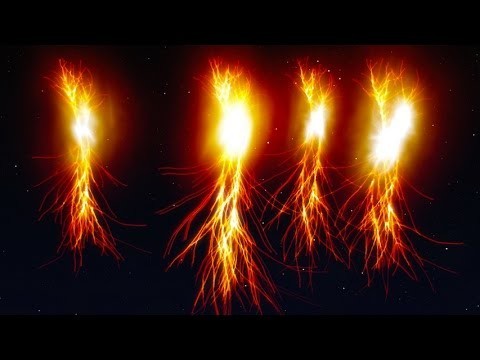 What are those things?

Apparently in certain conditions these things happen in the atmosphere and are BIZARRE.  Do you think this is related to northern lights or possibly something else?

Believe it or not these were just theorized before we could even observe them by a Scottish physics professor..  However it wasn’t until 1989 that scientists first photographed them.  In this video the observations actually happened in Chile which has one of the best environments for astronomy with very little atmospheric distortion or pollution:

As night falls, astronomers at Chile’s La Silla observatory are just starting their observations. Suddenly, a strange red flash of light appears on the horizon. An alert photographer is there to take a closer look! From ESO Cast.

This is actually the ESO in Chile:

Northern lights are caused from charged particles and gases entering the Earth’s atmosphere so these are a bit different.