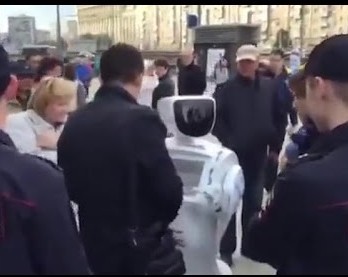 Is this even real?

We live in a time were we have made great achievements in the field of robotics. We use them for everything from manufacturing to vacuuming floors.

Now we have a robot which is being considered something of a troublemaker and was arrested at a political rally in Russia, and this is not the first time Promobot has drawn attention to itself:

Adding to the bizarre situation is the fact that this is the same model of robot that previously tried to escape twice from its manufacturer.

Before its arrest last Wednesday, the Promobot was busy “recording voters’ opinions on [a] variety of topics for further processing and analysis by the candidate’s team”, a company spokesperson told Nathaniel Mott at Inverse.

While that might sound like some fairly harmless (and not particularly unlawful) activity, it seems to have been enough to raise the ire of local authorities, who moved in to apprehend the robotic troublemaker.

Find out more and watch the video on page 2